The United States’ latest GDP figures are expected to be released on January 26th at 8:30 EST. For traders who seek to understand the health of the economy better, knowing the definition of Gross Domestic Product (GDP) is a good step toward achieving that goal. Accordingly, this article explores the meaning of GDP, the different types of GDP, how to calculate GDP, and the effects of the upcoming US GDP releases on the market. 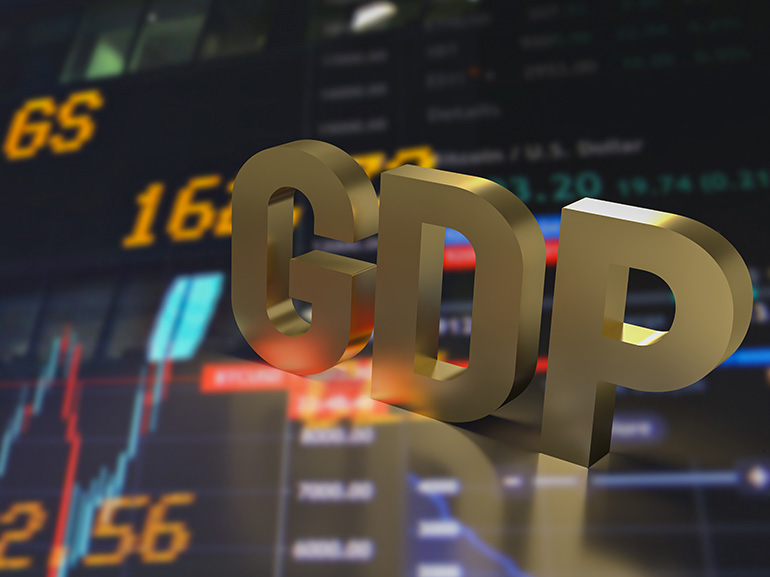 What Is Gross Domestic Product (GDP)?

So what is the simple definition of GDP? GDP or Gross Domestic Product is the total market or monetary value of the produced goods and services within a country’s borders over a specified time period. Since it measures the market value of produced goods and services, this economic index gauges a country’s growth or decline. Moreover, the ideal GDP growth rate is between 2% and 3%, according to economists. (Source:Investopedia)

Historically, the concept of GDP emerged in the aftermath of the Great Depression and World War II eras. While the history of GDP is certainly not devoid of action and monumental milestones, here are three key events behind the emergence of GDP:

In 1937, Simon Kuznets, an economist in the National Bureau of Economic Research generated a report to the US Congress in which he presented the original formation of GDP. He intended to gauge the overall economic production companies, governments, and individuals delivered in order to understand the health of the economy.

The US Commerce Department announced that the GDP was one of the 20th century’s great inventions.

How Is GDP Measured?

Measuring GDP can be done using the following methods:

How Does GDP Affect Me?

Broadly speaking, an increase in GDP rates usually generates more work opportunities, this is because it indicates a healthy economy and, consequently,  higher chances of prosperity and wage growth. On the flip side, lower GDP means that an economy is possibly underperforming or struggling, and as such, there would be fewer job opportunities, and perhaps even layoffs like those observed in the tech industry in the past couple of months partially due to high inflation, the war in Ukraine, and the Coronavirus pandemic. Nonetheless, due to GDP's multifaceted nature and various factors and components, higher GDP does not necessarily mean good news for everyone as it depends on the financial sector and the individual in question. This can be similar to how certain financial sectors and assets, which are often called safe-havens, perform well in recessions or inflationary atmospheres whereas other sectors struggle.

GDP comes in different forms and types like Nominal, Real, and Per Capita, among others. Below, we discuss the aforementioned types of GDP:

An economy's nominal GDP includes the current prices of all goods and services in a specific year in the calculation of economic production. This includes inflation and rising prices.

In contrast, to Nominal GDP, Real GDP is adjusted for inflation (does not include inflation in its calculation) and is considered one of the most accurate portrayals of a country’s economic health. It is usually determined by a predetermined base year or by using the previous year's price levels to determine the prices of goods and services.

Economic output per person is measured by GDP per capita which gauges the amount of money earned per person in a nation. In order to assess a population's standard of living and quality of life, this type of GDP evaluates the average per-person income.

Which Country Has the Highest GDP?

As of the end of 2022, the world’s largest economy by nominal GDP was the United States with over $25 trillion. Rounding out the top four were China, Japan, and Germany, with $18.3 trillion, $4.3 trillion, and $4 trillion in nominal GDP respectively.

The Latest US GDP Figures

It is no secret that the past year has been especially challenging for consumers who had to grapple with surging inflation reaching all-time highs and accompanying recession fears. Accordingly, GDP figures that reflect the health of the economy and measure inflation or deflation, showed dubious and often inconsistent results throughout the year.

For example, in July, US GDP declined by 0.9%, showing the economy was shrinking and perhaps on its way to a recession, which may have prompted the Fed Reserve to raise interest rates even further and may have generated market jitters. However, despite that gloomy outlook, the following GDP figures, which were reported on the 25th of August showed a slightly better image, as according to the US GDP report for the second quarter, the economy shrank by 0.6%, which may have indicated a slower pace of contraction than in the first quarter. Similarly, the US GDP figures for the third quarter of 2022, which were released on November 30th, may have been the relief consumers and market watchers have been seeking since it reached 2.9%. The recent rate was even above forecasts and may have mirrored improvements in consumer spending, as well as net trade.

With regard to predictions for the latest figures, the general consensus among experts seems to be relatively upbeat. It’s estimated that the Bureau of Economic Analysis will reveal to the public that the American economy grew by 2.8% over the course of the final three months of 2022. This growth rate, albeit slower than Q3’s, could have been propelled by a jump in economic output as last year came to a close.

Despite positive predictions, some are still hearing the drumbeats of an approaching recession. Somewhat disappointing retail sales figures over the holiday season may presage a retreat in consumer spending, which could push the world’s largest economy into a broad-based retraction as the year proceeds. However, if this release exceeds expectations, fears of such strong economic headwinds could be allayed for the moment.  (Source:CNBC)

Strong GDP figures could be taken by the members of the Federal Open Market Committee that the American economy is still robust enough to withstand further interest rate hikes. However, such a policy move could have a deleterious effect on major Indices across the globe.

Over the course of the trading day Thursday ahead of the US’ GDP release, the Nikkei (Japan 225) dropped by a slight 0.1%, while Hong Kong’s Hang Seng Index (Hong Kong 50) marked a rise of nearly 2.3%. How Wall Street traders will respond to today’s figures still remains to be seen.