The United States dollar has been on the upswing over the past week, nearing its highest value against some other currencies in a year and a half. However, much of whether this trend continues will depend on factors beyond American monetary policymakers’ control. 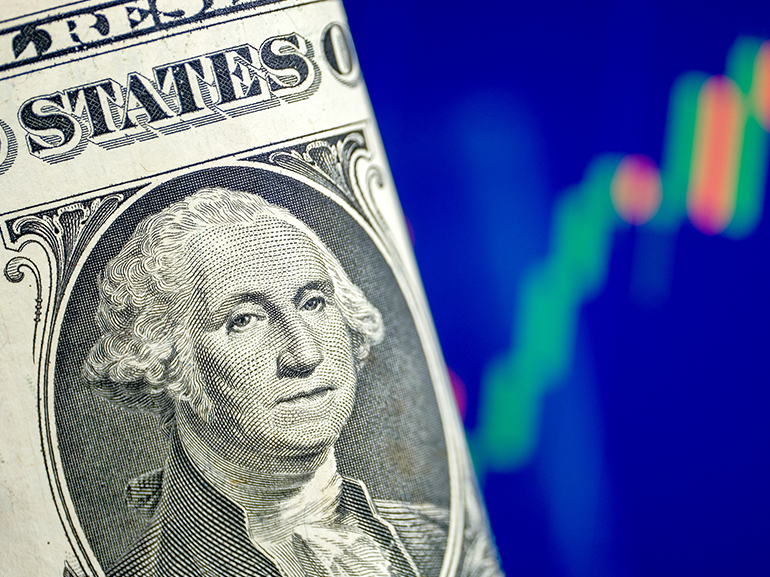 Over the course of the last trading week, the U.S. Dollar Index (DX), which measures the world’s largest reserve currency against a host of six major global currencies, rose by nearly 1.7%. This important measure of the American dollar’s strength hasn’t reached such levels since early July of 2020. The Pound sterling and the euro also declined over the last trading week against the Dollar, by 1% and 1.7% respectively. So what factors have led to this increase in the greenback’s strength?

As many traders might know, last week was quite a tumultuous one for markets from New York to Tokyo. Last week’s Federal Reserve meeting concluded without an immediate increase in interest rates, but Fed Chairman Jerome Powell indicated that the era of central bank-promoted liquidity could be coming to an end soon. Market sentiment seems to be that the first of four, or even five, hikes in the U.S. interest rate may come as soon as mid-March.

Given the prospect of the Federal Open Market Committee taking a hawkish turn in order to tame record inflation, a risk-averse mood was pervasive on trading floors around the globe throughout last week. Investors choosing to move their money out of ‘riskier’ asset streams may have been one of the primary factors behind the Dollar’s jump.

However, a less volatile opening to the trading week may take the wind out of the greenback’s sails. On Monday, indices across Asia seemed to be on the path to recovery from last week’s turmoil; the Nikkei-225 (Japan 225) and Hang Seng (Hong Kong 50) closed up by 1%. Although trading in New York had not yet begun as of the time of this writing, last Friday, the S&P 500 (USA 500) broke its losing streak with a 2.4% rise.

This semblance of a return to normalcy for major stock markets may have implications for the Dollar’s near-term growth trajectory; if traders recover from their recent jitters induced by tighter monetary policy, inflation, and the seemingly never-ending COVID-19 pandemic, the risk-averse mood that’s boosted the USD against other currencies could dissipate. Accordingly, the Dollar Index was trading down by nearly 0.3% as of the time of this writing Monday morning. Nonetheless, many important Forex pairs could be affected by policy decisions made far beyond American shores.

The United States’ central bank captured headlines this week, but market watchers may be waiting with bated breath for decisions coming out of London, Sydney, and Frankfurt in the coming days.

The Reserve Bank of Australia (RBA) is set to hold a meeting regarding monetary policy on Tuesday, February 1st. This will be followed by a statement on monetary policy this coming Friday. The RBA is expected by many policy experts to be gearing up for a similarly hawkish turn, consisting of an end to its $4 billion AUD-a-week bond-purchasing program. However, despite rising inflation, some are predicting that the bank’s governing board will not move toward a rise in interest rates until later in the year, if not 2023. The AUD/USD was trading up by 0.7% as of Monday morning, but an interest rate hike in the U.S. in tandem with a low cash rate in Australia could keep it down.

On the Old Continent, the European Central Bank and the Bank of England seem to be diverging in their policy directions. The UK’s Bank of England could very well be on track to instituting the nation’s second interest rate hike in two months, the first time this has occurred in eighteen years. If the BoE takes this path following its Thursday meeting, it could help in combating the UK’s thirty-year high in inflation. Furthermore, the GBP/USD, up 0.2% at just over $1.34 as of the time of this writing, could be boosted by a further increase in British interest rates.

Conversely, the European Central Bank, based in Frankfurt, Germany, seems to be more drawn to the slow track toward monetary normalization. The ECB, headed by Christine Lagarde, is also set to meet on Thursday; however, the EU’s monetary policymakers are not expected to wind down asset purchases in the near term. The EUR/USD pair was up by almost 0.3% on Monday morning; whether this trend will hold as the week continues depends at least partially on the ECB’s decision on Thursday.

The tides seem to be changing rather quickly in Forex markets as far as the USD is concerned. The greenback nearly cleared its highest weekly rise in seven months last week, but as of this morning, other currencies are gaining back ground. Despite this, some JPMorgan (JPM) analysts hold that the Fed’s aggressive turn will lead to the dollar increasing against the euro and yen for another two months.

What is likely is that the trend for the world’s largest reserve currency in the coming days will be determined largely by central bank decisions and market volatility, or the lack thereof. A major geopolitical destabilization, such as a Russian invasion of Ukraine, could also have traders looking for a safe haven in the form of USD holdings. Traders may need to wait and see how this week unfolds.