Over the past twenty years, market experts have observed that October tends to be the month of the year with the greatest volatility. Companies traded on the stock market tend to see the sharpest jumps and steepest drops in share value during the month of October.

Some of the global economy’s most traumatic events have occurred during the tenth month of the year; from the Crash of 1929 that ushered in the Great Depression to 1987’s ‘Black Monday’, generation-defining market drops seem to be concentrated in October. 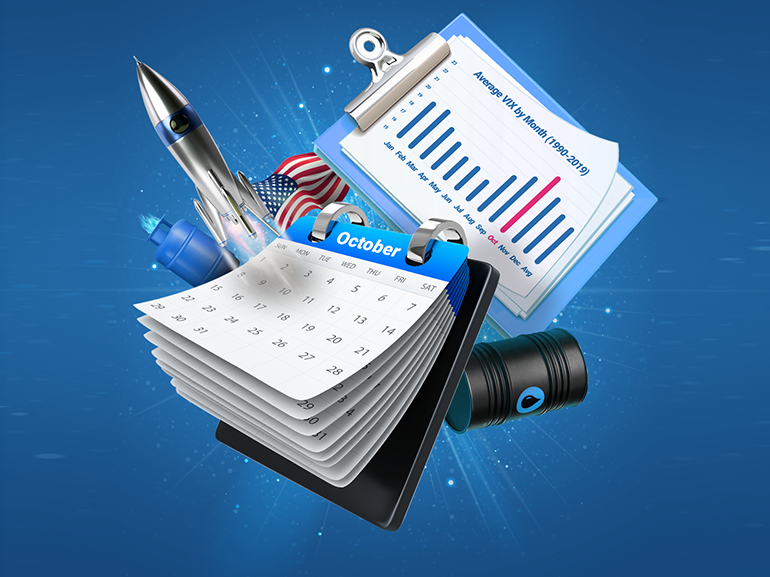 When one calculates the standard deviation of daily share price gyrations since the Dow Jones Industrial Index (USA 30 - Wall Street) was created in 1896, it can be shown that volatility for the index is 38% higher than average in October.

Another method of calculating monthly ups and downs on the stock market is the VIX Volatility Index (CBOE Volatility Index Futures), often referred to as the ‘Fear Index’. The VIX uses the same method used to calculate options valuations to predict expected market volatility on the S&P 500 (USA 500) for a given month. The VIX hit its record high in October 2008, during the height of the global financial crisis. Furthermore, since 1928, the S&P 500 has seen an average 8.30% difference between its closing high and low in October.

In recent years, predictions of market volatility have consistently been borne out. In October of 2020, global tech giants Amazon (AMZN) and Apple (AAPL) both posted jumps in share value by over 10% while the STOXX Europe 50 index fell by 10%. The preceding October, the price of Natural Gas (NG) rose by over 25% over the course of the month. In October of 2018, both NASDAQ (NDAQ) and Oil (CL) experienced double-digit drops.

Can Analysts Explain Why October Is Volatile?

Market watchers have repeatedly tried to formulate explanations for October’s reliable tumultuousness. Some theorise that the U.S. government could be influencing the market, as its fiscal year ends on October 1st, and the incoming Chairman of the Federal Reserve is announced every four years in October. Others attribute market volatility to traders’ lifestyles, as many return from their summer vacations after Labor Day and begin to make serious trades, leading to a peak in October.

Further explanations connect this yearly phenomenon to mutual funds making fiscal year-end trades before Halloween, to third-quarter earnings reports, or to the U.S. election cycle. However, according to some economists, the most likely explanation is more mundane. October’s volatility may simply be the result of an underlying seasonal business cycle that tends to end in the early autumn. According to Prof. Terry Marsh of UC, Berkeley, there is a high probability that the market jumps and falls that tend to characterise the tenth month of the year could just be a data fluke, without any compelling causative factors.

In conclusion, although October’s market volatility has come to be an expected seasonal occurrence in stock trading, traders may wish to stay wary of any convenient explanations for the phenomenon when making their buying and selling decisions.