The war between Russia and Ukraine coupled with inflation, fears of a possible global recession, and subsequent interest rate hikes have proved to be a potent recipe for market volatility over the past couple of months, and last July was no exception. Last month, various market sectors ranging from Forex to Commodities and Stocks have been hit hard by a cocktail of the aforementioned factors. What market sectors took the strongest hit and how did they fare in July? 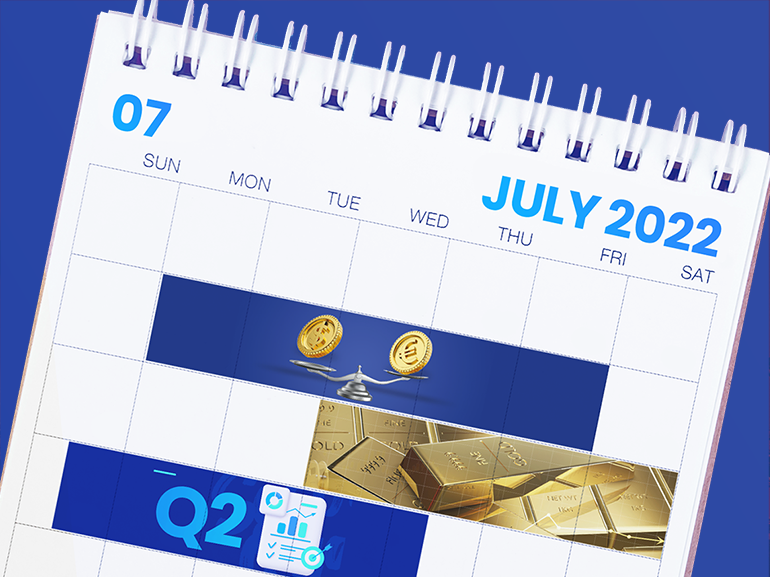 Since Europe seems to be at the epicenter of the Russia-Ukraine war, the Euro has taken a hit last month and the EUR/USD reached parity for the first time in over 20 years. It appears that Europe is one of the biggest sufferers of the Russia and Ukraine war which has led to an energy crisis. This might be due to the sanctions on Russia, which resulted in an attempt to stunt Putin’s army from advancing further into the Ukrainian land. These boycotts included an embargo on Russian energy resources, and since Russia is Europe’s biggest energy supplier, the Eurozone seems to be suffering an unprecedented energy crisis now.

Further complicating matters, as the world grapples with surging inflation by raising interest rates, Europe went on a much slower and a tad different course. Whereas central banks like the US Federal Reserve have been raising interest rates at a rapid rate in order to combat inflation, the Eurozone European Central Bank (ECB) has been moving more slowly. On the one hand, the ECB is trying to restrain inflation in order to stabilize the economy by raising borrowing costs for the first time in 11 years. On the other hand, the ECB’s rate is not matching up with the US Fed Reserve which has increased interest rates so fast that it has surpassed the rates in Europe. As a result, US Treasury bonds became higher yielding than Europe’s debt, and investors became more inclined to invest in the greenback. But that’s not all, the Euro, according to many analysts, might continue sliding in relation to the dollar, since the latter already holds a safe-haven appeal to investors and as long as the war in Ukraine persists, the Euro may keep depleting.  As of the time of the writing, the EUR/USD is trading at 1.01881. (Source:Bloomberg)

As Q2 earnings continued, in light of the overarching financial instability in the world, many companies reported less than optimistic earnings while others reported solid results. Some of the less optimistic companies was social media and technology company, Snap (SNAP). On the 21st of July, the social media mogul’s share sank by almost 40% after reporting disappointing second-quarter figures. Snap reported a loss of 2 cents as opposed to the predicted 1 cent per share. Moreover, its revenue was below expectations at $1.11 billion versus the expected $1.14 billion. Consequently, the company’s share price sank and the company also revealed that it will be slowing down its hiring process in order to safeguard its revenue growth. This might not come surprising to market watchers that have been observing the general hiring layoffs and slowdowns in other big tech companies that have also been trying to combat inflation, the war, and the aftermath of the COVID-19 pandemic. (Source:CNBC)

While there was an easier decline for Meta (META), this social media giant too has taken a hit in July after its Q2 earnings report missed expectations. On July 27th, Facebook’s parent company Meta reported a lower-than-expected revenue of $28.8 billion versus $28.9 billion expected, an earnings per share of $2.46 versus $2.54 expected. Additionally, its net income dropped 36% year-over-year. As a result, the social media giant lost about 5% of its share value afterward. The fall and gloomy results may be traced to the challenges social media and ad-based platforms have been grappling with due to Apple’s App Tracking Transparency. This feature prohibits apps from tracking user activity whilst using their platforms. This makes advertising much harder and less tailored for each user. (Source:Market Watch)

On the other side of the spectrum, Netflix’s (NFLX) earnings on July 19th may have acted as a light at the end of the tunnel for some investors. The day after its earnings, streaming behemoth, Netflix's share rose by 3.4%. This was due to it losing fewer subscribers than anticipated. Whereas the company shared that it expected to lose about 2 million subscribers in the second quarter, its earnings results showed more optimistic data as it revealed that the loss was only around 970,000.

While traditionally used as a safe haven and an inflation hedge, Gold (XAU) seemed to have lost its luster last month. After gloriously trading at above $2,000 per ounce earlier in March, the bullion felt the heavy toll of a stronger US Dollar and high interest rates. Following a higher than expected interest rates hike by the ECB, coupled with the Fed’s hikes, the precious metal erased its earlier gains that year by plummeting to its lowest level in 15 months. Hence, it struggled to maintain its safe haven appeal. The yellow metal was able to climb to $1,705 after hitting $1,695. According to market watchers, Gold may be able to recoup its losses and climb back to its $1,900-$2,000 levels if the Fed Reserve pivots its aggressive rate hikes approach. Along the same lines, Silver (XAG) traded at below $20 per ounce and neared a two-year low.

Whether or not the market will look different this month is yet to be determined. In the meantime, however, it seems that the same factors that reigned over the market in July are still present this August as inflation, the war, possible recession, and higher interest rates seem to be the recurrent motifs around the world. Investors may have to wait and see how this month turns out.