The tensions between the Russian Federation and Ukraine reached a new pitch on Monday as Russian president Putin formally recognised the independence of two breakaway regions of eastern Ukraine. The prices of certain commodities rose, and global indices fell, in tandem with the fears of approaching geopolitical conflict. 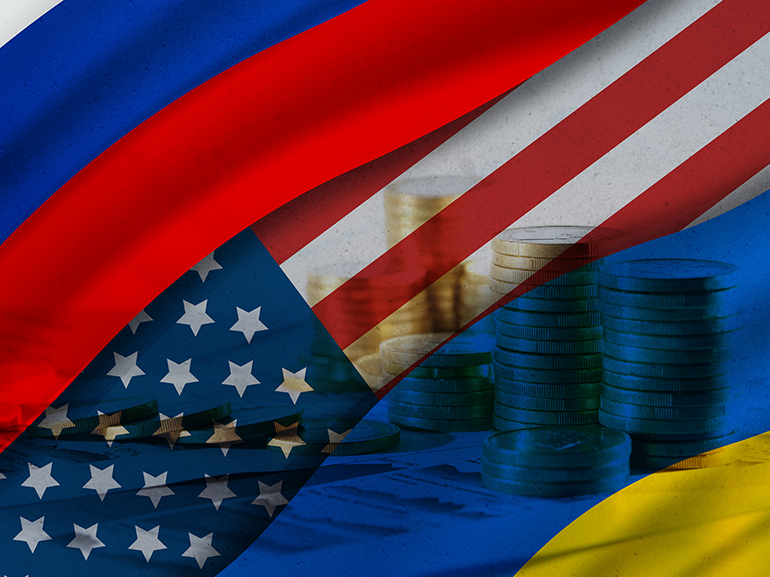 Putin Takes the Gloves Off

In a speech broadcasted on Russian state television Monday evening, Vladimir Putin ratcheted up the rhetoric surrounding his nation’s neighbour to the south. Formally taking a step that Russia had heretofore avoided, Putin announced that two separatist areas of Ukraine near the Russian border, Luhansk and Donetsk, would henceforth be considered independent states. Since the 2015 Minsk agreement, these two regions had been accorded a large measure of self-rule by the Ukrainian government but were not considered countries in their own right by the Russian Federation–until yesterday. This move was accompanied by the deployment of Russian soldiers to the area and gave new life to fears of a full-scale invasion.

In response to this unprecedented escalation of the conflict between the two post-Soviet states, United States president Joe Biden adopted an executive order formally forbidding American firms from investing or engaging in trade with Luhansk and Donetsk. The European Union also threatened sanctions against those who follow Putin’s lead in recognising the independence of these two supposed People’s Republics.

According to many geopolitical analysts, Monday night’s Russian pronouncement gave further justification to those positing that the over 150,000 troops stationed near the Ukrainian border will be deployed in a rapidly approaching shooting war. Even as the leaders of the United States and the Russian Federation may still hold a last-chance summit, markets are responding to the rapidly approaching prospect of a ‘hot’ international conflict.

The possibility of a steep rise in energy prices may already be coming to fruition. As of the time of writing, Crude Oil (CL) is trading at over $94 a barrel–a 1.5% rise. The international benchmark Brent Oil (EB) had also increased nearly 4.8% over the first two days of the week, reaching over $98 as of Tuesday morning.

Some market experts are already warning that the price of black gold could hit triple-digits if sanctions on Oil sales from Russia are implemented in response to a land invasion. Alternatively, if a diplomatic resolution to the conflict in eastern Europe is achieved, the price of petrol could shrink by over 10%.

Another immediate fear for many European consumers is the chance that Natural Gas (NG) supplies from the Russian Federation could be disrupted. So far, this apprehension has not been reflected by reality; the price of Natural Gas rose by just under 5% on Monday before falling 3.3% as of Tuesday morning. Uncertainty on global commodity markets could be the rule of the day until Putin’s intentions become clearer.

Stock traders have also responded to the risk of increased worldwide economic volatility. The indices on Wall Street were closed on Monday due to Presidents Day, but futures for the Dow Jones Industrial Average (USA 30), S&P 500 (USA 500), as well as the Nasdaq (US-TECH 100) all dropped over the course of the evening.

Much as happened last Monday, Asian stock traders were the first to express the risk-averse mood stoked by developments in the east of Europe. On Tuesday, the Nikkei 225 (Japan 225) index in Tokyo dropped by 1.7%, while the Hang Seng index (Hong Kong 50), based in the southern Chinese metropolis of Hong Kong, fell 2.8%. European indices were not spared either, with the German DAX (Germany 40) and Milanese FTSE MIB (Italy 40) both falling by over 1% as of the time of writing. Today’s drops came on the heels of Monday’s falls for these indices, of 2% and 1.7% respectively.

Despite the seeming threat of a market crash, other analysts opine that the gathering clouds of war do not pose any more than a short-term danger to equity growth. According to some estimates, stocks have risen following four-fifths of the major geopolitical crises experienced over the past thirty years. Over the medium term, the Federal Reserve’s hawkish turn could have a greater direct effect on the fortunes of Wall Street indices.

The world, traders and investors included, is currently gazing at the Russian-Ukrainian border with bated breath, wondering what will happen next. Various market sectors may already be responding to the current state of affairs, but much of whether the trends observed as this week began will continue rests on decisions taken at the Kremlin.