As this week began, markets across the world continued to be deeply affected by the developing situation in Ukraine. While Indices in Asia and Europe were down, the prices of many Commodities were climbing upwards. 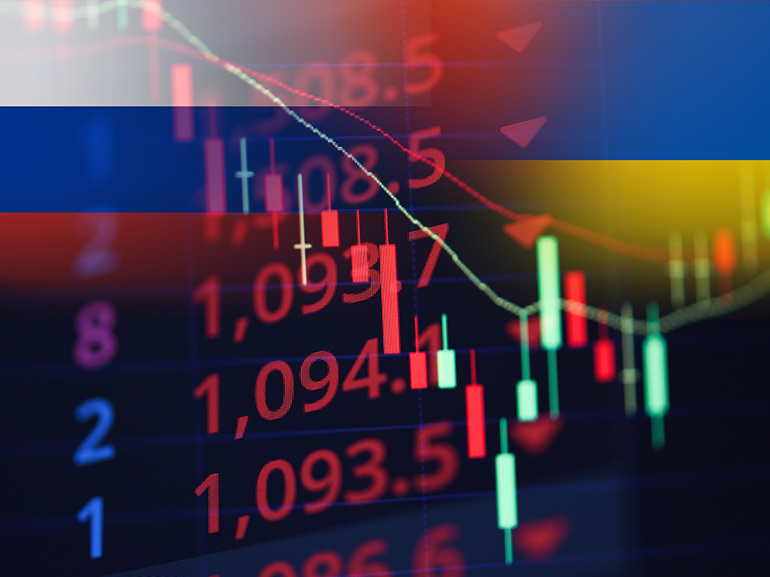 The crisis in Ukraine seems to be far from a conclusion. While world leaders from French president Emmanuel Macron to Israeli Prime Minister Naftali Bennet have tried to intercede and bring a halt to the fighting in Eastern Europe, clashes between the Russian and Ukrainian militaries continue to cause casualties across Ukraine.

Over the past week, sanctions imposed by democratic nations as well as a growing wave of divestment on the part of international corporations have brought turmoil to the Russian economy. From Visa (V) to Apple (AAPL) to BP (BP-L), firms from a plethora of different economic sectors have announced that they will no longer be doing business in the Russian Federation in response to the Russian military involvement in Ukraine.

Perhaps one of the most immediate economic consequences of the unstable security situation in Ukraine is the skyrocketing price of certain commodities, ranging from agricultural goods to precious metals.

On Sunday, March 6th, the United States’ Secretary of State Antony Blinken raised the prospect of a ban on Oil (CL) imports from Russia to the U.S. and European Union. According to some policymakers, Russian President Vladimir Putin is able to leverage the high and rising price of petroleum in order to evade the effects of sanctions and divestment on his country’s security budget.

One of the greatest concerns for European nations from the beginning of the crisis in Ukraine has been a potential rise in Oil and Natural Gas (NG) prices, given that a large proportion of the energy imports consumed in the EU are produced in Russia. This fear is being realised; as of the time of writing, Oil was trading up by 8.2% at over $124, an eight-year high. Furthermore, Natural Gas had risen by nearly 2% as of Monday morning. Ursula von der Leyen, President of the European Commission, has stated that this dependency on a single country’s energy output to keep the European economy could prove a strong impetus for the EU to move to renewable, domestically-produced power sources.

The international benchmark Brent Oil (EB) was also trading less than $10 under its record high price of $147.50, reached in 2008, at one point on Sunday. As of early Monday morning, Brent was just over $127.

Some analysts have posited that such Oil prices could raise record inflation in the United States to even higher levels; despite OPEC+’s decision last week to continue raising production levels, petrol prices have yet to break their uptrend.

Commodities on the Rise

Fossil fuels were not the only Commodities affected by supply disruptions. Russia and Ukraine together export over 30% of the world’s Wheat (ZW). More than 1.5 million Ukrainians have already fled the country, feeding fears that a lack of manpower as well as continuing uncertainty as regards the future of their country will deter Ukrainian farmers from planting this year’s crops. Disturbances in Black Sea shipping lanes could also prevent already-harvested grain from reaching markets, further increasing scarcity of the food source. As of the time of writing, Wheat was trading at nearly $1,300, marking a 31% rise over the past week.

More than an eighth of global Corn (ZC) exports also come from Ukraine’s fertile soil. Due to the same issues facing the Wheat trade, corn was up by just under 3% on Monday morning at a price of $775. Over the past week, this Commodity’s price has risen by almost 7%.

Another class of goods affected by global uncertainty stemming from the metastasising international crisis has been precious metals. Gold (XAU) was reaching toward $2,000 an ounce as of the time of writing, a 1.2% rise from Friday. Palladium (PA) was also up by more than 13%, trading at above $3,400 per troy ounce as of the time of writing. These value jumps for precious metals might be attributed to their reputation as an inflation hedge.

As has been the case since the crisis in Ukraine began, stock markets across Asia are responding to market uncertainty. Potentially in response to the prospect of further sanctions causing a domino effect resulting in high inflation, Indices in East Asia were trading down on Monday morning.

Asian economies may prove to be especially vulnerable to a jump in energy prices, as major economies like Japan and China must import most of the fossil fuels necessary to keep their economies running. The Nikkei 225 (Japan 225) in Tokyo lost nearly 3% on Monday, while Hong Kong’s Hang Seng (Hong Kong 50) dropped by over 3.2%. These major Asian Indices’ falls could foretell a spreading of the risk-averse market mood to other markets once trading opens in the West.

The world remains occupied with concern regarding Ukraine as the military engagement enters its twelfth day. While the outcome of the conflict between Russia and Ukraine remains undetermined, its effects on the markets are already being felt.