Solana (SOLUSD), Plokadot (DOTUSD), Polygon (MATICUSD), and VeChain (VETUSD) are the four new cryptocurrency CFDs which are now available for trading on the Plus500 platform. What should traders know about these newbies? 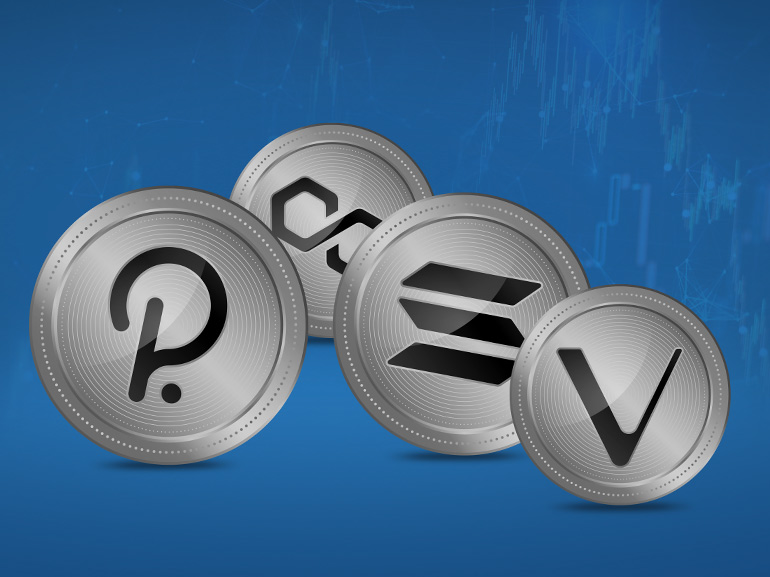 Solana: One of Etherum’s Biggest Rivals

Similar to Ethereum (ETHUSD) and Cardano (ADAUSD), this blockchain Crypto is designed to host decentralised applications. But unlike Ethereum which uses a PoW (Proof of Work) blockchain, Solana is more environmentally friendly as it is a PoS (Proof of Stake) blockchain. A PoW network generally uses more electricity as it requires intensive processing power. Whereas a PoS network uses significantly less energy as miners do not need to solve complex puzzles to prove work.

The Crypto offers a speedy operation process and lower fees, putting the coin ahead of its rival, Ether. Solana was developed at San Francisco based Solana Labs.

The coin was trading at less than $30 in July and leaped to over $180 in September.

Polkadot is a revolutionised blockchain which connects multiple blockchains into one single network and is designed to allow consumer control over online monopolies. This digital coin can process various transactions on many chains simultaneously, omitting the limitation which older networks face of only being able to process one transaction at a time.

Polkadot hit $40 in mid October for the first time in five months, which could have been due to the welcoming news of its first parachain auction being scheduled.

A protocol and a framework designed to build and connect blockchain networks which are compatible with Ethereum. The Crypto is previously known as Matic Network (MATIC). Polygon aims to revolutionise some of the challenges that Etheruem faces today, such as delivering an improved user experience, adopting a faster transaction throughput, and lowering fees.

VeChain was founded in 2015 by the former CIO of Louis Vuitton, Sunny Lu. Today Sunny Lu is the CEO of VeChain in Singapore at the VeChain foundation.

VeChain aims to prevent counterfeits, and various types of fraud and theft. To achieve this, the blockchain platform tracks parts and products using sensors and can follow each step of the supply chain.

After setting a record price in April this year, VeChain is now trading at a much lower value.

Bitcoin Rolls Ahead Despite New Rivals

Crypto watchers may not only keep a close eye on these new digital coin additions, but the Crypto giant Bitcoin (BTCUSD) seems to be stealing some traders’ attention. The world’s first cryptocurrency reached a record high above $67,000 on October 20th, as traders welcomed an anticipated futures Bitcoin ETF release. The very first Bitcoin ETF had been in the approval phase with the U.S. Securities and Exchange Commission (SEC) and on October 19th, the new Bitcoin ETF was available for trading, just before Bitcoin’s record high that Wednesday 20th. Market watchers may have been watching the popular crypto closely, as it has had a volatile year. Possible reasons for Bitcoin’s volatility could be due to increased institutional adoption of digital currencies and a growing asset-class maturity to a crypto crackdown in China.

Will the four new cryptocurrency CFDs get all traders’ attention or has Bitcoin stolen the show?