Among traders across the world, Cryptocurrencies have been growing more popular over the past several years. However, these digital coins have a reputation for volatility, characterised by steep rises in value and quick drops. So far this week, yet another chapter in the crypto market’s history of ups and downs is being written, with many Cryptocurrencies falling in price, while related firm Coinbase’s shares have hit a record low. 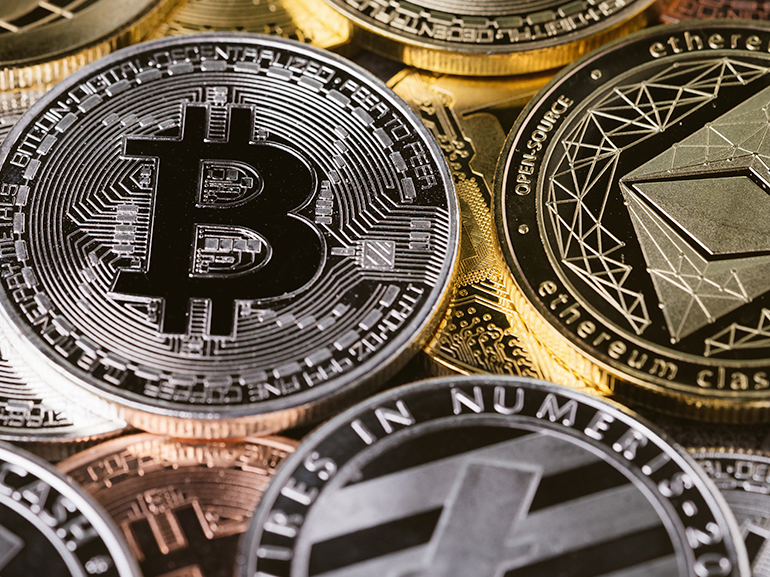 Cryptocoins as a tradeable asset are relatively new to the scene, with the first of their kind, Bitcoin (BTCUSD), hitting the market in 2009. Over the little more than a decade since digital coins first began to be traded, the variety available to investors has greatly expanded, with altcoins like Solana (SOLUSD) and Cardano (ADAUSD) joining the party as Cryptocurrencies continued their long-term climb in price.

For a long time, many held the position that crypto trading patterns moved independently of traditional Indices. However, recent days have seen a selloff across the crypto market in tandem with drops observed on key stock markets like the S&P 500 (USA 500) and Nasdaq (US-TECH 100). According to some experts, price movements in the digital coin sphere seem to be characteristically similar to those of technology and growth stocks, which tend to drop in times of economic uncertainty. When the market mood turns risk-averse, as may be occurring currently, traders are generally expected to shy away from this latter asset class.

Over the past week, Bitcoin has lost nearly 16% of its value as of the time of writing. This premiere digital currency dropped below $30,000 today for the first time in nearly a year before recovering slightly. As of this morning, Ethereum (ETHUSD) and Litecoin (LTCUSD) have dropped 14% and 18% over the past week as well, and the Crypto 10 Index (Crypto10), which tracks the performance of ten of the most popular digital currencies, has dipped 18.7%.

These significant retreats on the part of many Cryptocurrencies may lead some to conclude that macroeconomic concerns like record inflation, the conflict in Ukraine, and the continuing COVID-19 pandemic might be affecting crypto traders’ behaviour. Given that the near-term trajectory of these trends is far from certain, it is unclear when the past week’s selloff will reach its conclusion. While some market watchers are broadly optimistic regarding long-term prospects for digital coins, the Federal Reserve’s hawkish turn could very well keep any price recovery in check for the time being.

The Cryptocurrency market’s travails have not only affected the digital coins themselves; some firms with exposure to this economic sphere have also seen a drop in value. Coinbase (COIN), the United States’ most popular Cryptocurrency trading platform, is expected to release its quarterly earnings report today after market close, but its share value is already on a downtrend.

Yesterday, over the course of the trading day, Coinbase lost nearly a fifth of its share value. While U.S. markets as a whole posted drops on Monday, Coinbase’s was especially steep. Since the firm’s initial public offering just over a year ago, the firm has dropped by over 74% in share value.

Coinbase’s shareholders disproportionately tend to be retail traders, who hold more than $9 billion worth of the company’s shares, rather than other firms. That factor may have been the proximate cause behind this company’s being especially affected by the risk-averse sentiment taking hold of the markets recently.

Another unique event that may have increased scepticism towards Coinbase’s near-term prospects was a massive movement off of the exchange observed last week. On Thursday, May 5th, almost 19,000 Bitcoins were moved from Coinbase’s exchange to a ‘cold wallet’, an offline storage location where they can no longer be exchanged for the time being. This outflow represented more than $700 million in value.

Given the significant struggles the crypto market as a whole has been facing, it may come as no surprise to canny traders that today’s Q1 earnings release is not projected to be entirely encouraging for Coinbase shareholders. Current estimates are for the firm’s first-quarter 2022 losses per share figure to come in at one cent, on a total revenue of $1.5 billion. According to experts, this could be due to the negative trends seen across the digital coin market since the beginning of the year.

Cryptocurrencies have been marked by significant periods of volatility since their inception a little over a decade ago; whether these trends persist in coming days will rest in large part on what happens in the global economy as a whole.